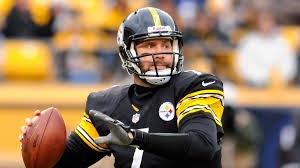 This week the @SportzGuruz Quarterback ranking's features the usual suspects up near the top of the totem pole, but as always, we know what you really want to hear. So let's talk the rest of the bunch, the ones that you might not know will be fantasy studs this week, first up, coming in at 6th on the pole, "Big" Ben Roethlisberger. "Big" Ben has had his ups and downs this season, but has had many more great games then shitty, and is riding a two week 25+ fantasy point streak, and is primed to stay red hot this Sunday against the Falcons. Atlanta has been a mess on defense this season, and puts up no threat to Ben's point production. Look for him to be a fantasy stud this weekend, netting you 21+ guaranteed fantasy points right in time for the playoffs, start with incredible confidence!!! Next up we have a name that may shock and make you scough at the mere thought of him starting on your fantasy team...
but Jay Cutler may very well propel you into the semi's or championship round in your league. He might not be able to win games for the Bears, but Jay Cutler had a huge fantasy game last week against the Cowboys, and faces an equally tasty matchup this Sunday in the Saints. Even after losing his top target Brandon Marshall last week, he was still able to gain fantasy owners 25+ points depending on your league settings. Roll with Cutler with great confidence, as he should easily produce 20+ points again this week, and when its DO OR DIE time in the playoffs, this is the kind of guy you should be relying on. 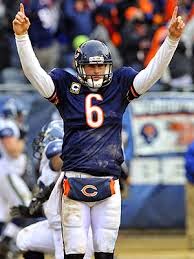